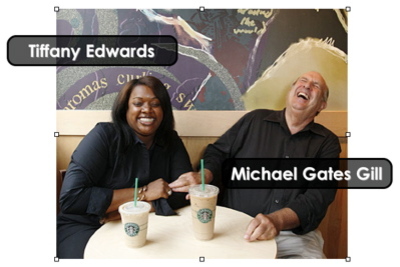 In HOW STARBUCKS SAVED MY LIFE, Michael Gates Gill shares the story of how he dropped out of the corporate rat race and found happiness while working a $10.50/hr job as a Starbucks Barista. Michael’s story is interesting. However, the more interesting story is about Tiffany Edwards.

Tiffany, who Michael portrays as “Crystal Thompson” in the book, was the Starbucks store manager who hired him, an older worker with no relevant experience in the food service business. Michael’s relevant experience was as a former advertising executive and business consultant. Tiffany looked past Michael’s advancing age, his lack of food service experience, and his past-pampered professional life to hire him as an entry-level Starbucks Barista.

In his first couple days on the job, Michael became very concerned. He realized the job of being a Starbucks Barista was going to be much more difficult than he imagined. Michael writes, “I had originally thought that a job at Starbucks might be below my abilities. But now I realized it might be beyond them. This job could be a real challenge for me—mentally, emotionally, and physically.”

Keep in mind Michael was dealing with lots of issues in his life during this time. His consulting business was defunct, the relationships with his children were defunct, and due in part to an affair … his marriage was defunct. Also during this time he was diagnosed with a brain tumor. Michael’s whole belief system was shattered.

Whenever I share with businesses some of the Starbucks Tribal Knowledge I learned from my days there, I always mention the importance of Making the Company Something to Believe In. This is about building an internal corporate culture where employees go way beyond being minions to being missionaries. When you make the company something to believe in, employees will talk about the quality of the company itself, the values the company endorses, and the ways in which their lives are enhanced because of it.

That’s what Tiffany did with Michael. All throughout the book, Michael gushes about how he believes in Starbucks. Michael learned those beliefs from the verbal and physical articulations of his superstar store manager, Tiffany Edwards. Read how Michael describes his Starbucks experience …

“I had found with Starbucks a better reality … not based on external status symbols but on a real feeling of confidence and support and genuine affection and even admiration for and from the Partners and the Guests. And Crystal. Crystal and Starbucks had saved me. Saved me from my pursuit of empty symbols, but also my anxiety about a fear-filled superficial life that hadn’t been, in the end, helpful or even enjoyable for me.”

An amazing story! Tiffany Edwards (“Crystal”) played a huge role in restoring Michael’s belief system by embodying the best qualities of the Starbucks corporate culture. Yet, we have heard nothing on record from Starbucks about this book, Michael Gates Gill, or Tiffany Edwards.

Starbucks seems to be purposely avoiding any connection to the HOW STARBUCKS SAVED MY LIFE story. Why is this? I don’t know.

Starbucks talks about getting bigger by acting smaller. As it relates to Michael and Tiffany, Starbucks is acting big, not small.

A big company avoids celebrating stories like the one in HOW STARBUCKS SAVED MY LIFE because it wasn’t “approved” by the company. On the other hand, a small company celebrates such a story because they are thrilled to have made a difference in an employee’s life.

I don’t think so.

All of those simple acts would be ways Starbucks should act to get bigger by being smaller. Maybe Starbucks is doing some of these small things and I am just unaware. I hope that is the case because embracing the HOW STARBUCKS SAVED MY LIFE story is a simple way Starbucks can get small despite being big.