NOTE: To understand my Starbucks bias, scroll to read my disclosure statement.

I can’t recommend Howard Schultz’s book, ONWARD: How Starbucks fought for Its Life without Losing Its Soul, to every business book reader. I can only recommend Howard book chronicling his second go-round as Starbucks ceo to about 250,000 people.

ONWARD has such focused appeal because it’s all inside baseball stuff. Howard positions too many insignificant details as earth-shattering business defining decisions. The only people who can fully appreciate and understand the minutia Howard writes about are those 250,000 people whose jobs are linked to Starbucks or whose lives are fanatically linked to Starbucks.

For example, Howard spends time writing about the switchover from the old automatic espresso machines to the new automatic espresso machines. He waxes poetically about giving Starbucks baristas “world-class technology at their fingertips.” And he agonizes about finding the opportune time to “announce the Mastrena to the marketplace [Wall Street].” Palpable stuff for those closest to Starbucks and not really for anyone else.

Another palpable moment in the transformation story of Starbucks detailed by Howard is the decision to remove heated sandwiches from the stores. Howard felt, and rightfully so, the smell of burnt cheese overtook the smell of coffee in the stores. So we, the reader, get to learn all the details about Howard being conflicted in removing the sandwiches because sales would suffer and Wall Street wouldn’t be happy.

We also get to learn the nitty gritty in how Starbucks cracked the code on serving heated sandwiches without overtaking the smell of coffee. Turns out, according to Howard, “… by moving the cheese to the top of the sandwich and lowering the baking temperature to about 300º F, the cheese was less likely to burn. The result was, I had to admit, a breakfast offering that was worthy of our coffee.”

Now do you understand the limited appeal of this book? This is all great stuff for Starbucks employees to know and for prospective employees to be aware of, but not necessarily anything anyone else would be remotely interested in. 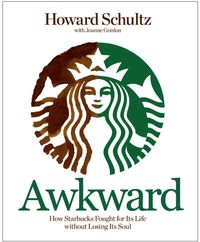 Besides the book’s focused appeal, ONWARD has many AWKWARD moments. One such awkward moment is where Howard refers to himself, multiple times, as the founder of Starbucks. (Jerry Baldwin, Zev Seigal, and Gorden Bowker might have something to say about that.)

Another awkward ONWARD moment deals with Starbucks positioning its lighter-taste profile coffee, Pike Place Roast, as “… nothing less than our reinvention of brewed coffee.” Howard writes, “For customers, Pike Place Roast ushered back in some of what had been missing in our coffee experience. Aroma. Freshness. A little theater. And… Pike Place would be proof that the company was actively reclaiming its coffee authority.”

Most people I talk to and the Starbucks employees I’ve talked with have a different opinion about Pike Place Roast. It lacks the bold flavor Starbucks built its coffee reputation on and in no way, can this every day coffee be viewed as reinventing brewed coffee. It’s simply a coffee that tastes more like coffee people can expect from Dunkin Donuts and McDonald’s. Howard even admits Pike Place Roast is “… a bit light for [his] personal preference.”

Perhaps the most awkward moment is the many times Howard derides how Wall Street measures the success of a company based upon short-term financial figures. Yet, Howard essentially claims victory in transforming the company because in fiscal 2010, financials for the company were at an all-time high from revenue to operating income to operating margin. It’s too early and born of too much hubris to proclaim victory.

Awkward moments aside, there are many VANGUARD moments in ONWARD where Howard shares smart, thought-leading business advice for entrepreneurs, marketing managers, and business owners/operators. However, these vanguard moments are hidden deep inside in the 330+ pages of overly dramatized details.

I’ve collected ten VANGUARD moments in this SlideShare presentation. Along with the smart business advice snippets, I’ve added in some audio commentary to explain why that moment is a VANGUARD moment. Click the play button to view the slides and hear my commentary. Enjoy…

DISCLOSURE: I am a biased reviewer of anything Starbucks. Why? I worked there for eight years a marketer in the mid-90s and early 2000s. I wrote a book sharing some of the fundamental business and branding principles Starbucks followed to become an iconic brand. The consulting advice I pass along to businesses is steeped deep with my knowledge of how Starbucks became a beloved brand. I also know too many of the long-time Starbucks employees who were laid off during the bad times. My perspective is influenced because of my experience but my opinions are also shaped by now having an outsider’s view of Starbucks. (Also, while I receive many business books from publicists and publishers, I bought my copy of ONWARD.)

UPDATE: I received a free copy of ONWARD from a publicist. It has been donated to the Austin Public Library.