One reason why the Starbucks Creative Group has been able to articulate the brand so well is because they live the brand. 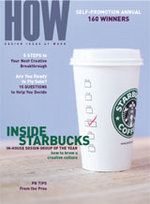 Within the walls of Starbucks, the Starbucks Creative Group has had to endure a revolving door of departmental Vice-Presidents, the occasional wrath of a tyrannical CMO, and ever-increasing workloads and expectations from Starbucks project groups.

However, through it all, they have remained dedicated to passionately expressing the essence of the Starbucks brand at every customer touch-point imaginable.

(I should know … I worked many years with the Starbucks Creative Group.)

From napkins to paper cups, in-store posters to annual reports, t-shirt designs to in-store architecture – the Starbucks Creative Group tells the story of Starbucks in such a way that deserves more recognition than they receive internally or externally.

Well … in their October 2004 issue, HOW design magazine has recognized the Starbucks Creative Group with their In-House Design Group of the Year Award.

One reason why the Starbucks Creative Group has been able to articulate the brand so well is because they live the brand. In the HOW magazine article, Thomas Prowell, senior copywriter and Miami Vice trivia whiz, says …

“Because so many of us started as baristas, we kind of view ourselves as the keepers of this tribal knowledge. I started here in 1990, before the big Starbucks explosion, and of the things that intrigued me about this company was that they took something that was mundane – coffee – and made it interesting and exciting again. That’s our ongoing challenge here, to avoid being mundane, to continue to find the excitement in the product. As long as we keep delivering that surprise to our customers, we’ll be successful – both commercially and creatively.”

Another reason why the Starbucks Creative Group has been successful at conveying the brand is because the company chooses to InSource before they OutSource. The internal creative agency at Starbucks handles most of the creative work for the company with outside advertising agencies working on larger, multi-dimensional projects.

The flat hierarchy structure of the creative team also contributes to a thriving work environment and culture. HOW Magazine writes,

“The in-house creative teams’ lack of hierarchy is another plus. There are just two levels: senior designers and copy writers, and designers and copywriters. Unlike in other global empires, titles aren’t hoisted around here like flags.”

While the article highlights Jeff Ashley, Bonnie Dain, Doug Keyes, and Thomas Prowell … there are three former Starbucks Creative Group partners who deserve recognition for their contributions to the design, the voice, and the style of the Starbucks brand –– Alice Meadows, Anna David, and Anna Sandilands.

Alice, Anna, and Anna may no longer work for Starbucks … but their combined spirit continues to work at Starbucks.