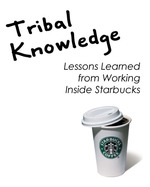 [Fourth in a series of posts on Starbucks Tribal Knowledge]

It is startling to note Starbucks is fast approaching having one store for every 10,000 people living in cities like Seattle, Atlanta, Dallas, Boston, and Oakland.

Yet, despite being seemingly everywhere, Starbucks excess access is not impeding financial success. Year-over-year sales growth at Starbucks has consistently been in the upper-to-middle single digit range for years now.

However, Starbucks excess access has changed its business proposition. Starbucks no longer can compete on being quirky and quaint. Instead Starbucks competes on being consistent and convenient. People no longer have to go out of their way to find a Starbucks. A Starbucks literally finds them … and that is all by design.

Starbucks Tribal Knowledge tells us if you stop competing on quirky and quaint and you must start competing on being convenient and consistent. For Starbucks, it has been a trade-off that satisfies more customers leading to greater sales success.