A broken window in business happens when someone isn’t paying attention to details. 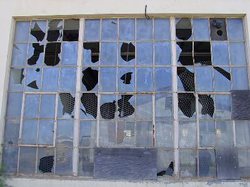 If you have read Malcolm Gladwell’s TIPPING POINT, then you are probably familiar with the Broken Windows theory and its impact on helping to reduce crime in New York City during the 1990s. Gladwell writes,

“Broken Windows was the brainchild of the criminologists James Q. Wilson and George Kelling. Wilson and Kelling argued that crime is the inevitable result of disorder. If a window is broken and left unrepaired, people walking by will conclude that no one cares and no one is in charge. Soon, more windows will be broken, and the sense of anarchy will spread from the building to the street on which it faces, sending a signal that anything goes.”

“A broken window can be a sloppy counter, a poorly located sale item, a randomly organized menu, or an employee with a bad attitude. It can be physical, like a faded, flaking paint job, or symbolic, like a policy that requires consumers to pay for customer service. When the waiter at a Chinese restaurant is named Billy Bob, that’s a broken window. When a call for help assembling a bicycle results in a twenty-minute hold on the phone (playing the same music over and over), that’s a broken window. When a consumer asks why she can’t return her blouse at the counter and is told, “Because that’s the rule,” that is a broken window. They’re everywhere. Except at the really sharp businesses.” [SOURCE LINK]

According to Levine, broken windows are telltale signs to customers that a business doesn’t care, that it is poorly managed, and or it has become too big and arrogant to adequately deal with little details.

Levine contends the best time to fix a broken window is the moment they occur. He continues by saying the only sustainable way to avoid and repair broken windows is to foster a culture where obsession to detail and a compulsive drive to fix broken windows permeates throughout a business.

I love the broken windows in business premise! It meshes totally with the Starbucks Tribal Knowledge of EVERYTHING MATTERS.

However, BROKEN WINDOWS BROKEN BUSINESS is a BROKEN BOOK. Why? Because this reader’s perception is what Levine says in 162 pages, could be said in less than 5 pages. Heck … you’ve already learned the book’s premise, gist, and proposed solution which took about 400 words.

My advice is to heed the BROKEN WINDOWS BROKEN BUSINESS message by reading and acting upon Levine’s well-written introduction (pdf) to his broken book.