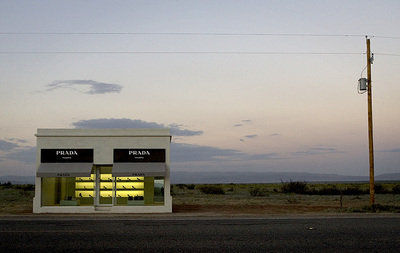 from the El Paso Times …

“Prada Marfa” looks incredibly out of place, a permanent public art sculpture in the middle of nowhere.

Almost everyone in far West Texas is either scratching their heads and wondering what it’s all about or talking about this strange art object in the desert that resembles a high-fashion boutique in Paris or Milan.

The artwork, a 15 1/2- by 25-foot stucco and adobe rectangular building filled with expensive hand-crafted Prada shoes and handbags, went up a couple of weeks ago on desolate ranch land on the outskirts of Valentine: population 217 and roughly a 2 1/2-hour drive southeast of El Paso.

from an ARTFORUM article …

”Behind its shatterproof, plate-glass windows were posh-looking high heels and handbags. There amidst the tumbleweeds, in the very landscape where Giant was shot, was a boutique displaying accessories from Miuccia Prada’s fall 2005 collection.

Was this the inevitable apotheosis of Judd-effect gentrification?