I laugh when Wall Street thinks market saturation is an issue for Whole Foods. It’s not. 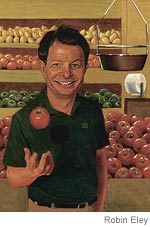 Some turbulence has hit Whole Foods Market (WFM) with its stock price plummeting last month after the company informed Wall Street to expect same-store sales in 2007 to be anywhere from 6% to 8%. Those are solid comp numbers but not solid enough when Whole Foods has been recording double-digit comps (11.0% to 14.9%) in the last few years. Wall Street expects more and thus, dinged Whole Foods stock price for failing to meet expectations.

As a former director of national marketing at WFM, I’ve shared some thoughts on what makes this company so remarkable. One of the things I admire most about Whole Foods is the company’s passion to change the way the world shops, eats, and appreciates food. The company passionately celebrates the role natural/organic foods can play in helping people live happier, healthier, and more rewarding lives. Passion propels performance at Whole Foods.

Nevertheless, as a publicly traded company, WFM has to answer to Wall Street. And Wall Street is getting skittish with Whole Foods ability to deliver given the increasing number of WFM locations and rising competition from the likes of Wal-Mart which is now selling more organic/natural foods.

So how big of a threat does John Mackey view Wal-Mart. In the WSJ interview, Mackey says …

”It never pays to underestimate Wal-Mart or any competitor. So far, we haven’t seen much impact from Wal-Mart, where we’ve gone head to head against one of their Supercenters that has a lot of organic. It hasn’t affected us that much.”

And when asked about market saturation and the slowdown in same-store sales, Mackey says …

”Same-store sales are lower for a multiplicity of reasons. Greater competition. There’s cannibalization. I read about the slowdown with the consumer, they’re spending less. Is there saturation? Certainly, some of our markets have more stores than others. We’ve had three consecutive years of double-digit same-store sales growth and our sales per square foot are $900. It’s harder to raise the bar if you keep raising it. You can’t compound at the same rate. No retailer ever does.”

However, Whole Foods mind share is a lot higher than its market share. That’s the beauty of having a strong brand—people talk about the brand … a lot.

The biggest challenge facing Whole Foods continued success is its ability, or inability, to open stores.

In 2006, they opened only 13 new stores. The most new stores WFM has ever opened in a 12-month time period is probably 15 new locations. That’s not enough. The company needs to open more stores. Yes, sales at existing WFM locations will be slightly cannibalized when more new stores open. But the “customer pie” increases with every new store Whole Foods opens. It’s the same growth philosophy Starbucks uses.

Every new store Starbucks opens cannibalizes sales at an existing store. A cannibalized Starbucks location can expect a 10% or so sales loss. But that loss is temporary. If the real estate decision is right, sales at the cannibalized location will climb back to “normal” in about six months. And sales at the new Starbucks location will eventually reach/exceed its sales pro forma expectations. By aggressively opening new stores, Starbucks takes advantage of opportunities to not only increase sales at individual stores, but also takes advantage of the opportunity to grow the “customer pie” by increasing its overall market share.

At every conference call with Wall Street, like the one from Nov.4, 2006, Whole Foods proudly informs investors they have nearly 90 stores in the development pipeline with more leases to be signed.

But the input doesn’t match the output.

So why doesn’t the input match the output? It’s my contention that decentralization hampers the ability of Whole Foods Market to open new stores.

WFM is a decentralized organization with its 11 regions and 189 stores having tremendous autonomy to make decisions. However, it is my understanding the procurement of new real estate leases is a centralized function at the company. But the physical development/build-out of new stores is a decentralized, regional function. And unlike Starbucks, Whole Foods doesn’t build new locations using an established plug ‘n play kit of parts. Instead, Whole Foods starts from scratch every time it builds a new store.

The beauty of this start from scratch build-out philosophy is Whole Foods refuses to become complacent and is always striving to improve every store it builds to provide more dazzling experiences for shoppers. The tyranny of this approach comes down to an issue of time. Since Whole Foods is ALWAYS recreating the wheel by not having a set kit of parts to plug ‘n play, it takes more time to build-out new stores.

Generally speaking, the plug ‘n play kit of parts Starbucks uses constitutes 85% of every new store it builds. The remaining 15% build-out is store-specific so as to increase its local relevancy in the market. At Whole Foods, those percentages are probably reversed with 15% of every store being built from a kit of parts and 85% being store specific design decisions.

WFM could increase its output to match its input by reconfiguring the percentage of plug ‘n play kit of parts it uses in new stores. I’m not advocating an 85/15 split like Starbucks. I’d be satisfied with WFM using a 50/50 split.

So … as a WFM shareholder and former WFM marketing director, I’m much more concerned about its inability to open new stores than I am about anything else impacting the company.