“American companies are obsessed with window dressing because they’re reluctant, no, afraid, to look at whatever it is they really do and evaluate it from the inside out. When things are down, CEO’s look to consultants and marketers to rethink, rebrand or repackage whatever it is they are selling, when they should be getting back…

“American companies are obsessed with window dressing because they’re reluctant, no, afraid, to look at whatever it is they really do and evaluate it from the inside out. When things are down, CEO’s look to consultants and marketers to rethink, rebrand or repackage whatever it is they are selling, when they should be getting back on the factory floor, into the stores, or out to the research labs where their product is actually made, sold, or conceived.” — Douglas Rushkoff | GET BACK IN THE BOX 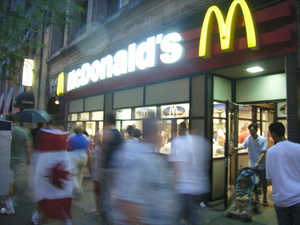 Since posting its first-ever quarterly loss in 2002, McDonald’s has been on an amazing run of 45 consecutive months of increasing sales. And in December of 2006, the company recorded a 6.9% increase in same-store sales as compared to December of 2005. That’s a remarkable comp number for a mature company like McDonald’s. Just as remarkable is the fact McDonald’s market share is 3x bigger than its two main competitors (Wendy’s and Burger King). Additionally, the company is being rewarded for driving sales with a stock price at/near its seven-year high. Good times abound for McDonald’s these days.

The business media has picked up on this story and published recent profiles detailing the ins/outs of McDonald’s successful resurgence. As I’ve read these articles the one theme that has struck me is how McDonald’s has taken an inside/out approach to driving sales. Instead of solely relying on outside advertising to drive sales, McDonald’s has driven sales by improving its inside approaches of store operations, product offerings, and customer experiences.

Traditionally, McDonald’s growth engine has been fueled by opening new locations and not necessarily on improving the operations of existing locations. That strategy has changed. McDonald’s has purposely slowed the growth of new store opening because as McDonald’s CEO Jim Skinner puts it, “We proved that we were getting bigger but not better. And we have to be better. Your experience today at McDonald’s has to be a better experience than it was yesterday.”

From an operations perspective, McDonald’s is delivering better customer experiences by extending its store hours beyond the standard 6 a.m. to 11 p.m. time period. According to a BusinessWeek article, “Since 2003, more than 90% of the 13,700 McDonald’s in the U.S. have extended their hours beyond the basic 6 a.m. to 11 p.m. day. Nearly 40% operate non-stop [24 hours].”

Increased breakfast sales at McDonald’s reflect the impact the widening of store hours has had on the company. Breakfast sales now account for 30% of sales and nearly 50% of profits at a typical McDonald’s location. (For comparison, the sales breakdown per daypart are Lunch 24%, Afternoon 15%, Dinner 16%, and Overnights 16%.)

The “being better, not bigger” mentality also extends to new product offerings. The McGriddle breakfast pancake was introduced in 2003 and has become an iconic McDonald’s offering rivaling the McMuffin in stature and sales. Last year, McDonald’s introduced the Snack Wrap, a fried chicken strip wrapped in a tortilla with cheese and lettuce. Sales of the Snack Wrap are 20% higher than company projections and have helped to increase sales significantly during the afternoon daypart.

By slowing new store growth and instead focusing on delivering better experiences and better products, McDonald’s is awash in billions of dollars in capital which it is using to increase its dividend to shareholders and using to remodel its stores. In the last three years, over 3,000 McDonald’s locations have been remodeled. Going forward, McDonald’s has plans to spend dollars to remodel every one of its locations around the world.

For McDonald’s, success these days has come about by focusing on inputs and not outputs. Companies that focus on outputs sell the sizzle but fail to deliver the steak. They tease us and tantalize us with creative window dressing advertising but displease us and dismay us with dismal customer experiences.

If a mature company like McDonald’s can wean itself off its obsession to window dressing, your company can too. Your company can focus its time, money, and energy on delivering better products, better services, and better customer experiences to drive better sales. This is the inside/out approach to building your business which when successful, will not only produce profits but also create an endearing and enduring brand.

In TRIBAL KNOWLEDGE, I wrote the following which plays off this inside/out strategy …

“A business can’t sustain itself on image, no matter how much money is dumped into sporadic, heavy-up ad campaigns. Companies that put their money behind their brand and not their business fail to realize that the business is the brand. And to realize the full potential of the brand, one must work on and work in the business every day of every year. You cannot create a brand before you create a business—the process is simultaneous. As you build your business, you create your brand.” — Me | TRIBAL KNOWLEDGE

NOTE: Source articles for this blog posting include: