“In a business where front-line employees represent the face of the company—where every transaction counts—it only makes sense to treat the store-level employees with the same respect (and benefits) as those in upper management.” — John Moore | TRIBAL KNOWLEDGE Steven Bigari, a successful McDonald’s franchisee from Colorado Springs, understands the importance of treating front-line…

“In a business where front-line employees represent the face of the company—where every transaction counts—it only makes sense to treat the store-level employees with the same respect (and benefits) as those in upper management.” — John Moore | TRIBAL KNOWLEDGE 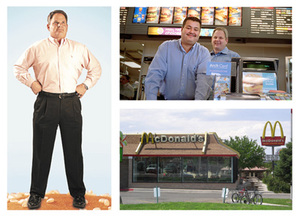 Steven Bigari, a successful McDonald’s franchisee from Colorado Springs, understands the importance of treating front-line employees with compassion and respect. In what began as a plan to reduce employee turnover has blossomed into a business ethos where the Golden Rule of treating others like you would like to be treated became standard operating procedure at his Golden Arches McDonald’s locations.

In 1990, Steven Bigari was a struggling McDonald’s franchisee dealing with dire cash flow problems. His first plan of action was to reduce costs across the board, including the elimination of paid vacations for front-line employees. Bigari presented his cost reduction plan to a mentor of his who promptly shot down the plan by saying, “You can afford to give up your rizzing-razzing vacation, but they [front-line employees] can’t, so I hope you have a better plan than that.”

Bigari understood exactly what his mentor was saying:


TAKE CARE OF YOUR PEOPLE.

So instead of reducing employee benefits to curb costs, Bigari increased the benefits he offered to employees. He added services such as day care, transportation to/from work, and small loans to the mix of employee benefits. Bigari made the business case for adding such expensive benefits believing it would not only reduce employee turnover, but also keep employees more focused on daily customers at work than on their daily problems at home.

To add day care to his list of employee benefits, Bigari partnered with a local church to provide such services. In order to provide employees with transportation to/from work, Bigari used to buy abandoned cars from police auctions and resell them to employees at cost. Now, a local car dealership refurbishes donated cars and resells them to the employees. The short-term/no-interest micro loan program Bigari setup lent nearly $30,000 to front-line employees, which all but $960 was repaid.

Treating front-line employees as family not only changed the lives of his employees, it also changed his life. In June of 2006, Bigari sold his McDonald’s franchises and based off his experience treating employees like family, he created and now runs a non-profit group called America’s Family to offer similar services to low-wage employees at other companies.

The lesson for us all is to Practice the Golden Rule. Treat employees as you would like to be treated and the company will be ultimately rewarded. Endearing and enduring companies are those that develop meaningful relationships with its employees that go beyond being professional to being personal.