There’s been much hullabaloo surrounding the FTC blocking the proposed merger between Whole Foods and Wild Oats. The FTC believes this merger will concentrate too much of the country’s natural/organic supermarkets in the hands of one retailer. And because of this, consumer choice will be reduced, leading to higher consumers prices for natural/organic foods. In… 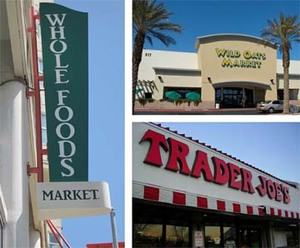 There’s been much hullabaloo surrounding the FTC blocking the proposed merger between Whole Foods and Wild Oats. The FTC believes this merger will concentrate too much of the country’s natural/organic supermarkets in the hands of one retailer. And because of this, consumer choice will be reduced, leading to higher consumers prices for natural/organic foods.

In the lawsuit filed last week, the FTC contends, “Consumers have benefited directly from the price and quality competition between Whole Foods and Wild Oats. If this acquisition occurs, those [price/quality competitive benefits] will be lost.”

Many Wall Street analysts, lawyer-types, and highly-informed shoppers have chided the FTC for such irrational antitrust action. They cite the FTC is too narrowly defining this marketplace as only being defined by natural/organic grocers and not the larger supermarket industry. Plus, it has been noted that Wal-Mart, Kroger, and the other supermarket leaders are significantly increasing their natural/organic offerings to take advantage of this long-emerging trend.

As a former marketer with Whole Foods Market, I’ve been thinking a lot about this situation. What surprises me most is how much credit the FTC is giving Wild Oats. The FTC believes Wild Oats is Whole Foods biggest competitor and that there is a vibrant competitive battle between these two grocers. The FTC also seems to think Whole Foods strategizes to counter how Wild Oats prices its merchandise.

Whole Foods long ago stopped considering Wild Oats as a competitor mainly because of the company’s continued weak financials. As for strategizing over how to handle Wild Oats pricing scheme, that’s not been a focal point for Whole Foods.

What has been and continues to be a major focal point for Whole Foods, as it relates to competition and pricing, is TRADER JOE’S. Trader Joe’s is the grocer that keeps Whole Foods in-check with prices, not Wild Oats.

Trader Joe’s, a privately-owned specialty grocer with over 280 locations in 32 states, has carved an interesting niche within the natural/organics retail industry that the FTC has failed to notice. They are nearly three-times as large as Wild Oats in store count and almost five-time larger in overall sales.

Since the company is private, financial numbers are hard to come by; however, the Supermarket News trade magazine estimates 2006 sales at Trader Joe’s were $5.0 billion. In his book, “The Trader Joe’s Adventure,” author and long-time retail industry journalist Len Lewis, estimates sales per square foot at Trader Joe’s approach $1,300. (For reference points, Whole Foods operates about 195 locations and 2006 sales were $5.6B. Sales per square foot at Whole Foods are around $900. Sales at Wild Oats in 2006 were $1.2B and the company generates about $450 in sales per sq. ft.)

Not only will you see similar pricing in the brand name products each grocer sells, the similarity in private label offerings is also noteworthy. Trader Joe’s does brisk business with its wide array of ready-to-eat frozen foods. Each frozen meal offering from Trader Joe’s is branded in a light-hearted manner with Mexican meals under the “Trader Jose” name and Chinese dishes under the “Trader Ming” name.

Whole Foods noticed the success they were having with private-label frozen goods and strategized on how best to counter. What Whole Foods did was develop a wide array of private labels products with various names like Whole Catch (frozen seafood), Whole Treat (frozen deserts), and Whole Kitchen (frozen entrées).

I bring all this to our attention because in the FTC’s narrowly defined marketplace for natural/organic grocers, they seem to have forgotten about Trader Joe’s and its competitive positioning against Whole Foods. Remember, Trader Joe’s is growing rapidly. They currently have 280+ locations with sales estimated at $5.0B. Because they open 12,000 sq. ft. stores, Trader Joe’s can find suitable real estate locations easier and open up stores faster than can Whole Foods.

The FTC needs to recognize Trader Joe’s is a considerable threat to Whole Foods Market.

Trader Joe’s, along with Wal-Mart, Kroger, Wegman’s, Costco, and others will help keep prices down and competition high for shoppers seeking higher-quality natural/organic foods if the Whole Foods/Wild Oats merger is approved. I’m sure the lawyers prepping Whole Foods Market’s defense will make sure to point out the robust competition that Trader Joe’s and others bring to the supermarket space.