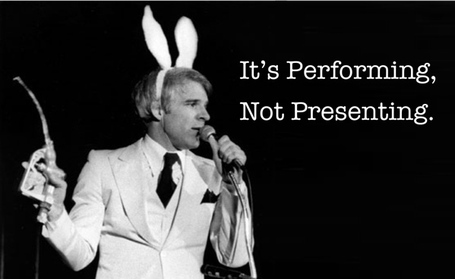 Lately I’ve become too comfortable delivering presentations. My fall calendar was quite busy with gigs in big cities, small cities, and international places. And feedback from both attendees and conference organizers has all been very positive. But something within me wasn’t satisfied. That something was telling me I’m plateauing as a speaker.

On a recent plane trip, where I was to deliver a presentation, I read Steve Martin’s just-published memoir about the rise of his stand-up comedy career. (We may have forgotten that before Steve Martin was an actor, screenwriter, and best-selling author, he was a groundbreaking stand-up comic.)

As a child I felt an attachment to Steve Martin partly because his KING TUT song was the first 45-rpm single I bought; partly because his on-stage goofiness (arrow through head, etc.) inspired the budding class clown in me [peep this for proof]; and partly because my Dad and older brother saw him live in Las Vegas back in 1979. I also remember spending hours looking at his GET SMALL album cover where he wore the funny nose and had a messed-up balloon animal hat atop his head.

Anyways … back to my Eureka! moment. Something in Steve Martin’s book triggered a thought that has changed how I approach my speaking gigs — I do not deliver presentations. I GIVE PERFORMANCES. Because I give performances, I need to be more exaggerated, more animated, more vocal … more like I’m “on stage” performing.

Growing up my Mom used to always tell me, “John, you should be on stage.” I would always shake that off. But what she said rings true. As someone paid to give presentations, I am on stage. While not an actor, I’m a performer. I get paid to perform on stage in front of businesspeople. Thus, I need to stop acting like a “presenter” and start being more like a “performer.”

Last month I began putting into practice this angle of giving performances rather than just delivering presentations. I deliberately became more animated on stage. My voice inflections were more exaggerated. I worked (and walked) the entire room, making lasting eye contact with attendees. My timing improved as I focused on delivering my key takeaways as if they were punchlines to a joke. I felt great afterwards. And the feedback from attendees confirmed how good I felt.

Plus … I kid you not … I’ve had people come up to me afterwards and tell me that if this presentation thing doesn’t work out, I should become a stand-up comic. Eureka! I might be onto something here.