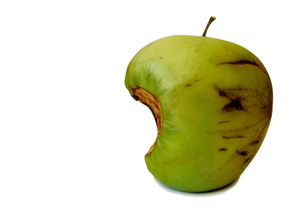 That’s the question Dr. Will Felps, Rotterdam Business School professor, sought to answer. His findings were published under the title of, How, When, and Why Bad Apples Spoil the Barrel. [preview available].

This American Life brought to life Felps’ work in a recent episode. It’s a fascinating piece, worthy of spending a few minutes listening to. (Listen here.)

The gist is this … Felps’ study indicates the spillover effect of Bad Apple behavior can undermine the success of a group. Groups in this study infected with a Bad Apple, performed 30%-to-40% worse than similar groups without a Bad Apple.

This study identified three personality types linked to Bad Apple behavior. I’m sure we’ve all experienced one of these personalities in our group project work:

1. THE JERK
This personality will make rude and insulting comments directed at others. He’ll criticize other people’s ideas without offering up alternative ideas of his own.

2. THE SLACKER
The attitude of indifference persists within this person. Verbally and non-verbally, he’ll convey feelings of “whatever” and “who cares.”

3. THE DEPRESSIVE PESSIMIST
The Debbie Downer of the group. This person will complain about how unenjoyable the project is and openly doubts the group will succeed.

(Interestingly, these represent some of the same destructive on-the-job personalities Dr. Bob Sutton wrote about in THE NO ASSHOLE RULE.)

What’s a group to do if they are burdened with a Bad Apple?

Sure, you could confront and try to reform the Bad Apple. However, a better approach could be to follow Jim Collins’ advice from BUILT TO LAST and have the virus, that is the miserable person, ejected before the spillover effect happens.

Mucho kudos to the My Curate’s Egg blog for some super-sleuthing link finds.