No business is destined to live forever. Sustained success is difficult to achieve. Decades-long success is attainable.

This is the last in a series of posts sharing business lessons learned from the movie, AMERICAN GANGSTER.

Setting the Scene:
Thanks to a misstep by Frank Lucas, who wore a “clown suit” Chinchilla Mink coat to the Ali/Fraizer III fight, the police became aware of Lucas’ success. The “Blue Magic” distribution arrangement with drug lords and mafia families resulted in an assassination attempt on Frank’s wife. And, the unique supply chain operations deal between the Vietnam-based heroin supplier and United States Army personnel was crumbling due to the American pullout from the Vietnam War.

Despite these major setbacks, Frank was recklessly determined to continue growing his “Blue Magic” business.

Winners Can Quit
No business is destined to live forever. Sustained success is difficult to achieve. Decades-long success is attainable. However, century-long success is nearly impossible to realize.

The average life span of a Fortune 500 company is less than 50 years. 33% of companies listed in the Fortune 500 in 1970 were gone by 1983. These businesses either died, merged, or were sold off as smaller business units. [SOURCE]

What goes up, will go down. We know this to be true from a basic understanding of both physics and business.

Frank Lucas defined his end as never-ending power and wealth.

By the time his supply-chain operations were crumbling due to the impending American pullout from Vietnam, Frank was a powerful and wealthy man. He was winning at the business game he defined. But winning wasn’t enough for him, he wanted to continue growing his “Blue Heroin” business by any means necessary.

During their last visit together, the General gave Frank Lucas brilliant business advice… 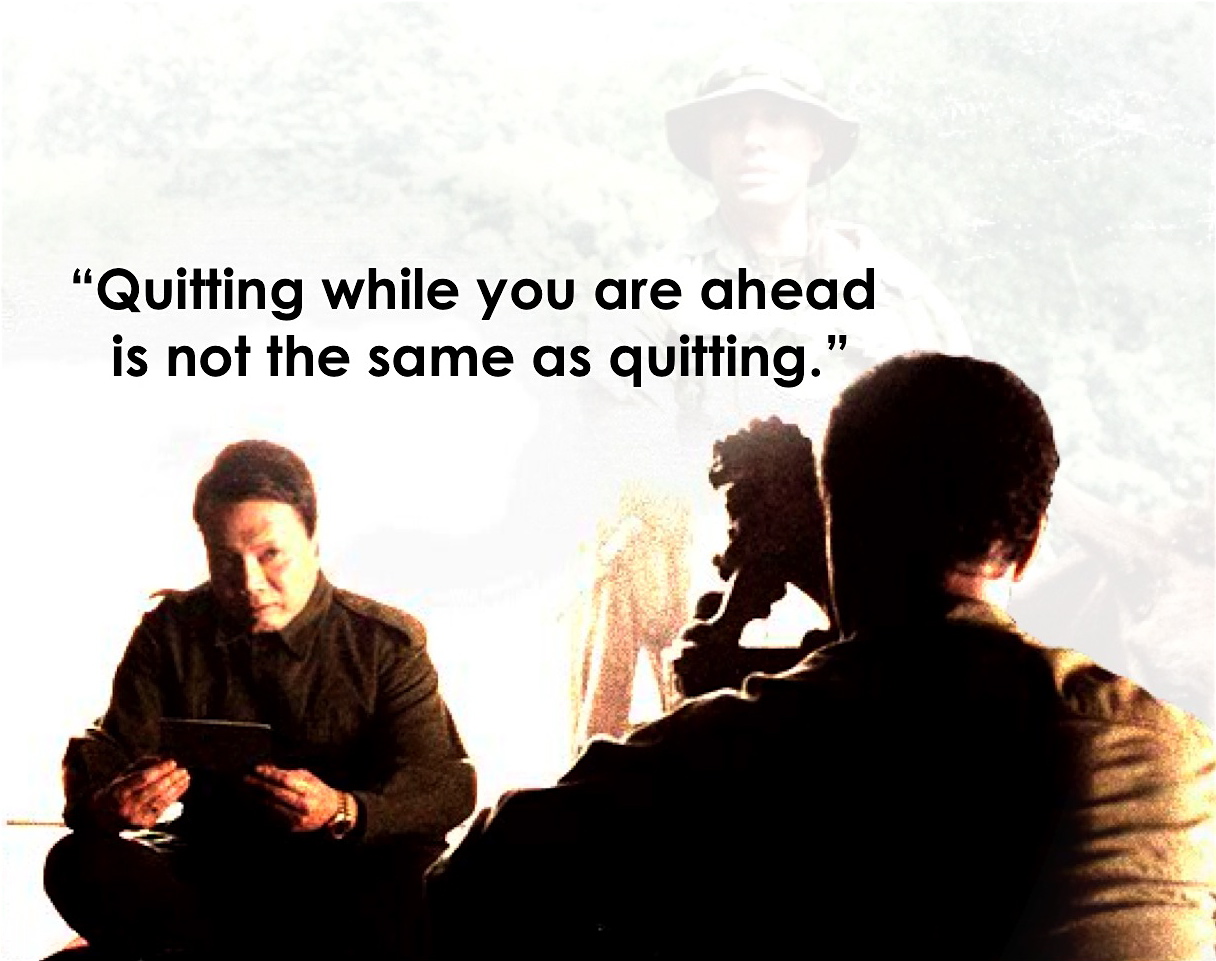 Now that’s a line worthy of contemplation … “Quitting while you are ahead is not the same as quitting.”

In the must-read business book, THE KNACK, Norm Brodsky spends a chapter talking about the decisions entrepreneurs face when growing their business. He says, “Growing a business is a matter of choice, before deciding to grow, make sure you know why you are doing it.”

When you know why you’re growing a business, then it’s easier to know when to quit and totally reasonable to quit.

However, if you, like Frank Lucas, are growing a business for never-ending power and wealth, then you’ll never know when to quit. And thus, you will eventually lose in the game of business.

Frank didn’t know when to quit and he was eventually arrested. He was convicted of conspiracy to distribute narcotics and sentenced to 70 years in prison. Because Frank cooperated with government authorities leading to the arrest and indictment of crooked police and drug dealers, he served 15 years in prison.