Kip Tindell Thinks Outside the Box

The Container Store sells lots of empty boxes. Close to $650 million dollars worth of boxes and other storage stuff in 2011. But if you ask Kip Tindell, CEO and co-founder of The Container Store, he’ll tell you the company sells time more than it does boxes.

The Container Store sells lots of empty boxes. Close to $650 million dollars worth of boxes and other storage stuff in 2011. But if you ask Kip Tindell, CEO and co-founder of The Container Store, he’ll tell you the company sells time more than it does boxes. “To accomplish something,” Kip says, “you need to be well-organized.”

The Container Store has been helping people become well-organized and thus, giving customers time to accomplish meaningful things like spending more time with family and spending time working on a great business idea.

Growing up in Dallas, I’ve known of The Container Store since I was a child. It wasn’t until I became a retailer marketer that I learned to truly admire how they do business.

At a recent Austin Business Journal event I attended, Kip Tindell shared smart outside-the-box business advice on what has mattered most in growing The Container Store business.

”People are the Whole Ballgame.”

Throughout the one-hour discussion, Kip kept talking about the vital importance of treating employees well. Kip believes companies have a “moral authority” to make the work environment such that employees go to work because they want to, not have to.

[SIDEBAR: Kip said Fortune Magazine had a difficult time believing such a small, regional company could rank so high on their “annual best companies to work for” list. The magazine ended up sending a reporter to work in a store for a few weeks to learn what was going.]

Today, The Container Store truly does treat its employees well.

The average store-level employee at The Container Store makes $48,000 a year. That’s twice as much as someone could expect to get paid for a similar job someplace else. New hires are given 263 hours of paid training in their first year. Most retailers give new hires less than 10 hours of training.

Kip Tindell says The Container Store experiences less than 10% turnover at the store level. He credits this astoundingly low number, even in today’s tough job market, to the notion, “It’s fun to work with people who are spectacularly good at what they do.” 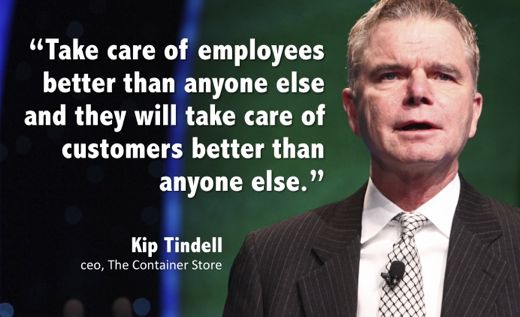 One of the long-standing principles practiced by The Container Store is ONE EQUALS THREE. As in, one great employee will do the work of three good people.

The company is very selective in whom they choose to hire. They strive to hire only GREAT employees. That way, The Container Store can pay its employees twice as much and still come out ahead because that one great employee is as productive as three good employees.

As a boss, Kip Tindell says he’s “ridiculously communicative.” He believes “communication is an act of compassion.”

The company culture at The Container Store is based upon communicating everything with everyone. Employees, according to Kip, feel included when everything is communicated with them. Kip delivers the same updates to the company’s board of directors as he does to employees. The only topic that’s off limits are salaries, everything else is discussable.

Kip talked briefly about how the goal of every employee at The Container Store is to make customers so happy that want to do a little dance. Creating the customer dance isn’t so easy when some of the stuff you sell includes trashcans and coat hangers.

In an online article, Kip explains the “Customer Dance” this way…

“Creating the ‘customer dance’ is really our objective. The customer dance is about the experience in the store and everything that happens after the customer returns home. People have to go home and live with what they’ve purchased for a long time, so we want them to do a little dance every time they open that closet door… because it’s perfect for them, and frankly, because they feel an emotional connection to it.”

If what you’ve read hasn’t convinced you The Container Store is a different kind of company, this might.

The Container Store has declared Valentine’s Day as a National We Love Our Employees Day. They give employees gifts, special recognition, and encourage customers to leave employees “love notes” on the company blog. The company also painted a love note to employees in an odd, but noticeable spot. 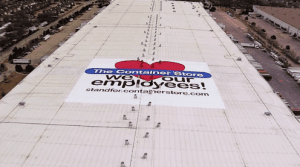 Kip Tindell summed up the core belief that guides the employee-first culture at The Container Store by paraphrasing something Southwest Airlines co-founder, Herb Kelleher once said, “You can build a much better company out of love, not fear.”