Chopping Down a Product

Years ago I wrote about how businesses “chop down” their products to maintain/grow profits. I used a scene from AMERICAN GANGSTER to illustrate this point. It’s the scene where Frank Lucas confronts Nicky Barnes for chopping down his “Blue Magic” dope in order to make more money.

Read as drug kingpin Frank Lucas shows some serious CMO chops in explaining why diluting a product is a bad idea.

Setting the Scene:
Frank Lucas’ “Blue Magic” heroin became the market leader in New York City. Rivals said he had “upended the natural order of things” by selling heroin that is twice as good for half as much. Competitors left the heroin market because “nobody wants to compete with a monopoly.”

To accelerate growth of the “Blue Magic” business, Frank arranged wholesale distribution agreements with other drug lords and mafia families. This shift in business strategy made competitors part of the “Blue Magic” family, with Frank Lucas as the all-powerful CEO and Chairman of the Board.

Never Dilute a Brand
Nicky Barnes competed with Frank Lucas and the success of “Blue Magic” hurt the financial viability of Nicky’s operation. Grudgingly, Nicky signed on as distributor of “Blue Magic.”

In an effort to increase profits of his “Blue Magic” sales, Nicky began diluting the purity of the heroin to increase his inventory and his margins. He sold the diluted heroin as “Blue Magic.” Frank Lucas wasn’t pleased and addressed his concerns just like a top-notch Chief Marketing Officer would to any rogue field marketing manager, maverick product manager, or renegade franchisee. 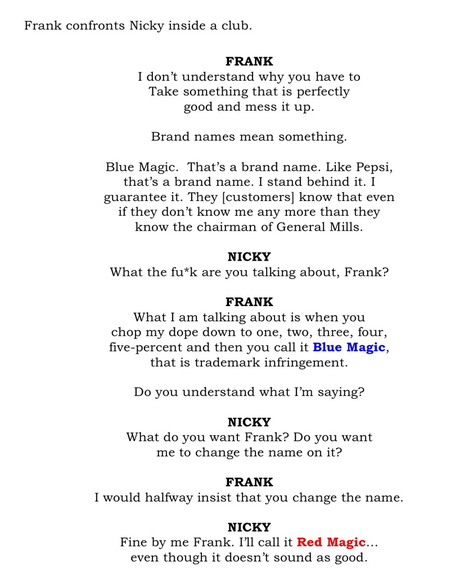 Businesses “chop down” their products all the time. In the quest to maintain profits or possibly, grow profits, businesses make strategic decisions to dilute their offerings. And if done inconspicuously enough, customers will hopefully never notice.

Frito-Lay chopped down its 12-oz bag of chips to 10-oz. bags. Price remained the same.

Hellmann’s chopped down its 32-oz. jar of mayonnaise to 30-oz. Price remained the same.

Dial chopped down its soap bars from 4.5-oz to a 4.0-oz size. Price remained the same.

Bounty chopped down the number of towel sheets per roll from 60 to 52. Price remained the same.

However, customers have noticed all this chopping down. According to a Consumer Reports study, 75% of shoppers surveyed said they have noticed smaller package sizes from their favorite brands. And, 71% of shoppers believe the package downsizing is a clear attempt by brands to hide price increases. It’s interesting to note, 50% of shoppers prefer brands stop chopping down their products and instead, keep their old package size and simply raise the price. [SOURCE: Consumer Reports]

The takeaway lesson is simple … when a business decides to dilute its products, it runs the risk of drawing ire from customers.

The action step is also simple … if you find yourself saying or thinking, “A customer will never notice that.” Chances are, they will. Be prepared to deal with their reaction.