Ernest Dichter is a name every marketer should know. 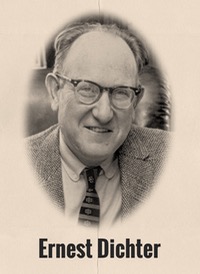 Early on in the writing of THE PASSION CONVERSATION we stumbled upon a long-forgotten Harvard Business Review article titled, “How Word-of-Mouth Advertising Works.” It was published in 1966 and we couldn’t help but think how much further along the marketing world would be if it had heeded the article’s advice.

Ernest Dichter wrote the article. Dichter, who you ask?

ERNEST DICHTER is a name every marketer should know. He was an Austrian-born psychologist who spent a lifetime studying human motivations and applying it to marketing brands. He’s known as the father of motivational research and credited with coining the term, focus group.

Dichter’s pioneering research techniques and analysis changed the way that giants like Chrysler, Procter & Gamble, Exxon, General Mills, and DuPont sold products to consumers. His advice to the prestigious clients was essentially to humanize the brand in order to connect better with people. Psychobabble it wasn’t. It was indispensable marketing advice then, today, and tomorrow, no doubt.

However, his research from the mid-1960s revealed. “When the consumer feels that the advertiser speaks to him as a friend … the consumer will relax and tend to accept the recommendation.”

Whoa! Where’d that knowledge go for the last half-century?

Imagine how much further along we’d be if more marketers in 1966 had taken note of Dichter’s smart findings on the importance of humanizing brands.

In this article, Dichter goes deep into in reviewing the psychology of word of mouth recommendations by outlining the motivations for why people talk about a product/service. He also lists the motivations for why people listen to and act on a recommendation. Keep in mind, the following marketing perspective is nearly 50 years old. Reading it now feels like we’re going back to the future of marketing.

Dicther’s research revealed that a person will talk about a brand if he “gets something out of it.” Meaning, the talker receives self-satisfaction from mentioning a product or service to someone. In particular, Dicther outlines four motivations for why people talk about a brand.

1. Personal Experience
First-hand involvement with a product will spark someone to talk because “… it is talk about the product which confirms for the speaker his ownership and joy in the product, or his discovery of it.”

2. Self-Confirmation
Dichter details eight types of self-confirmation people seek through talking about products and services, including: “gaining attention,” “showing connoisseurship,”having inside information,” and “spreading the gospel [by] converting the listener to use the product.”

3. Being Nice
“Here the prevailing attitude is the need and intent to help, to share with the other person enthusiasm in, and benefits of, things enjoyed. Products serve mainly as instruments which help to express sentiments of neighborliness, care, friendship, and love.”

4. Influenced by Advertising
“Since it is difficult for consumers to avoid exposure to advertising, many people have turned to accepting it for its independent attraction and entertainment value. Thus entertainment value and originality of ads have become topics of talk.”

In Dichter’s study, he analyzed nearly 500 instances of purchases made resulting from word of mouth conversations. His analysis found that people determine whether to listen or ignore brand-related word of mouth conversations based upon if (a) “the person who recommends is interested in him and his well-being” and (b) “that the speaker’s experience with and knowledge about the product are convincing.”

Dichter dug deeper to identify speaker types who have the greatest influence in making a word of mouth recommendation click with the listener. The most influential of these speakers are:

1. Industry Experts
“Under this header are those persons who, on the basis of their training and/or work, appear to be closer to the product and more knowing about it than the average consumer.”

2. Celebrities
“Included are movie, theater, TV, and radio personalities whose ‘authority’ is attributed to prominence in show business.”

3. Knowledgeable Passionate Fans
“The connoisseur may know as much or more about the product and its background than the expert, but he does not make his living in connection with it; he merely enjoys it and his know-how about it.”

4. Closest Ties
“What is meant here is the influence of mother, father, big brother or sister, husband wife, boyfriend or girlfriend which expresses itself not necessarily by means of verbal communication, but by the speaker’s actions.”

Reasons Why People Act on Word of Mouth Recommendations

Dichter writes about the critical factor of having an “A-ha” experience for people to act on a word of mouth recommendation. His analysis explains how mass advertising fails to effectively produce “A-ha” word of mouth experiences.

Instead, Dichter reasons that a “… recommender is often much more capable of establishing … a dialogue of conviction … [leading to an] A-ha experience” than is traditional advertising.

According to Ernest Dichter, four factors make word of mouth marketing more effective than traditional advertising. These four factors are:

1. Authentic Passion
“The real meaning of a product and of its effect to the user is revealed not only through the choice of the speaker’s words, but also through the discharge of emotions in inflection, face, and body expressions, and gestures.”

2. Genuine Compassion
“That the speaker is genuinely concerned with the listener’s well-being or has his advantage at heart becomes eminently believable in cases in which the recommendation is geared to, and takes into account, the individual needs or special circumstances of the listener.”

3. Actual Proof
“Tangible evidence” that a product works, as seen in real life, “…serves to strengthen the impact … of a recommendation in cases in which personal intention or product relationship are not sufficiently convincing in themselves.”

4. Semblance of Secrecy
When the speaker displays a “reluctance to divulge the source or brand name of a product” it can serve as sign to the listener that the product is so uniquely desirable the speaker doesn’t the want masses to know about this secret brand. “This refers to the well-known psychological phenomenon that the harder it is to get a desired object, the more desirable it becomes.”