If your business is caught in the strategic crosshairs of needing to get bigger but remain smaller, the following excerpt from TRIBAL KNOWLEDGE might provide you with boardroom fodder.

“A company can grow big without losing the passion and personality that built it, but only if it’s driven by values and by people, not by profits.” — Howard Schultz

Earlier this month I was talking with a regional franchise chain with aspirations to grow big… really BIG. But they want to grow BIG without losing their soul. Easier said than done.

That conversation reminded me of the growth issue we faced at Starbucks in the late 1990s. At that time, Starbucks was fast approaching 2,000 locations. That’s BIG by most standards but Starbucks dreamed bigger and that dream has become reality as Starbucks now operates over 21,000 shops in 63 countries.

In my love story book about Starbucks, I shared the mentality of how Starbucks was able to still view itself as an upstart David even though they had become a monolithic Goliath.

If your business is caught in the strategic crosshairs of needing to get bigger but remain smaller, the following excerpt from TRIBAL KNOWLEDGE might provide you with boardroom fodder. Enjoy… 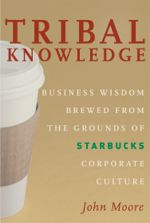 There is a life-cycle model called the Sigmoid Curve, an S leaning forward, that describes the stumbling beginning, fast rise, glorious peak, and slow decline of every successful business, brand, or even idea. Management guru and author Charles Handy discussed this model in his book, The Age of Paradox, and pointed out that the right time to create a new idea, start a new curve, is when you are approaching the apex, not once you have passed it—for once you start down the other side of that curve, it may be too late.

Sounds simple, but how to do that in the real world? Once you’re on your way to becoming a Goliath, do you really want to go through being a David again? It may be more romantic, but let’s remember, David was the underdog—and for good reason. But if you settle into the summit of the curve, you’re a Goliath just waiting for the next David to come along and knock you off your perch.

Starbucks long outgrew being the David of the specialty coffee industry and became its Goliath. The company dwarfs all specialty coffee competitors in market share and customer mind share. However, Starbucks refuses to settle into the role of being a coffee Goliath. It will not consider itself a Goliath because it no longer considers other coffee retailers as its competition.

Starbucks began with the mission of wanting to get the world to appreciate better tasting coffee. To put it simply, Starbucks has accomplished this mission. With the popularity and sustainability of the company, the next step is to make the transition from Starbucks as coffee “brand” to Starbucks as beverage “icon.” From this perspective, Starbucks is an upstart, competing against the old-school beverage icons like Coke and Pepsi. Starbucks considers itself a David because, compared to Goliath-proportioned Pepsico’s $66 billion and Coke’s $47 billion yearly revenues, its annual $15 billion is small in the megalithic beverage industry machine.

So what is Starbucks doing to step up to its new self-imposed competitors? One way is to look to other brand icons for ideas. Take Coke’s Diet Black Cherry Vanilla Coke® beverage and compare that to the Starbucks Marble Mocha Macchiato. Both rely on what started as a specialized drink (Vanilla Coke® and a Caramel Macchiato), and then grew into enhanced versions of themselves. And, taking a page from iconic McDonald’s and its “limited-time only” specials like the McRib® and the Shamrock Shake®, Starbucks has introduced promotional holiday beverages. Drinks like the Pumpkin Spice Latte and the Peppermint Mocha bring a higher price point and add some zest to the usual menu offerings for customers, and that translates into driving higher year-over-year sales at Starbucks.

Sure, borrowing some sales gimmicks from the large competitors works to some extent, but Starbucks didn’t get where it is today by following. Its brand is strong because it is the leader in the specialty coffee industry, and it led because of the passion its people had for the product. To transition to icon status will take hard work, significant investment, and continued passion. Upping the ante, going up against the Goliaths on a bigger stage, gets company adrenaline flowing. It motivates employees to keep a competitive edge, especially when the competition has changed. Nobody roots for Goliath. Most everybody roots for David. The best companies have their own employees rooting for them. Getting bigger by positioning itself as being smaller can rally customers and employees alike.

Starbucks’ success turned itself into a Goliath, and now it has redefined and repositioned itself against a bigger Goliath in order to become a David again—a position Starbucks feels much more motivated operating under.