Keep the Likeables. Dump the Assholes.

In 2006 I led a breakout session at a HOW Design Conference on “Growing a Brand. Growing a Team.” We talked about the importance of needing a healthy team to grow a healthy brand. 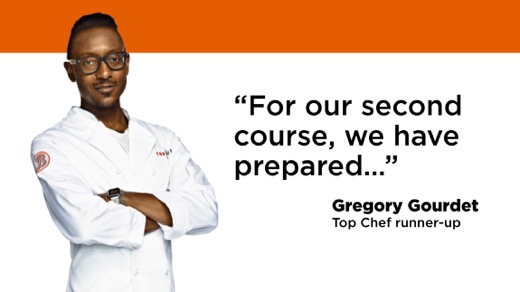 Being a top chef is a team sport. Yet, we tend to think of it as an individual game. It’s always a team of people working together from the line cook to the sous chef to the expeditor to the pastry chef to the many other cooks in the kitchen who get the dishes out to our tables.

On the season finale of Top Chef Boston, we saw Mei go up against Gregory for a winner-take-all culinary clash. Mei won the clash (and the cash) but Gregory won me over with a subtle unselfish move that you might not have noticed.

As is usual with the Top Chef finale, the chefs address the diners before each course to tell them what they are eating and how the dish was prepared. Before announcing each course, Gregory went plural on us. He said lines like, “For our next course, we have prepared…”

He could’ve easily said, “For your next course, I have prepared…” But he didn’t. Gregory knew his small team, made up of two other chefs eliminated from the competition, was responsible for getting the food on the plate and on the table.

I nodded with approval when I heard Gregory go plural by deliberately choosing to say, “we” and not “I.”

In 2006 I led a breakout session at a HOW Design Conference on “Growing a Brand. Growing a Team.” Besides sharing advice on how healthy brands grow, we talked about the importance of needing a healthy team to grow a healthy brand.

The meat of that session centered on the team-building advice of Keep the Likeables. Dump the Assholes.

(Yes. Bob Sutton’s book THE NO ASSHOLE RULE had just been published and it heavily influenced my thinking.)

We were working under the thinking that Likeables are friendly and helpful. They are the consistent performers on project teams. They always meet deadlines. They make others look good. They hold themselves accountable. They have a positive demeanor. They would rather solve matters face-to-face than through email exchanges. They are selfless.

On the other hand, Assholes are co-workers that no one wants to work with. These folks keep extensive CYA files. They Cc: the world on inconsequential emails. They always have excuses. They would rather engage in divisive hallway conversations than actively participate during project meetings. They are selfish. Yet, every company has them and continues to hire them.

One participant in the breakout session chimed in that Assholes can front themselves as a Likeable in the interview process only to show their true colors later.

So, how can you distinguish between Assholes and Likeables during the job interview process?

Our breakout session devised a simple test called THE “I” EXAM.

When interviewing a potential job candidate, listen for how many times they say “I did this” or “I did that” when talking about their past project/group work.

Sure, it’s natural for a job candidate to talk about themselves in an interview. But if they routinely say something like, “In the group I led, we did this … and we did that…” then you probably have a Likeable.

However, if the job candidate neglects to mention the “We” and only mention the “Me” … then they’ve failed THE “I” EXAM and can be considered Asshole material.

Let’s root this thinking to firmly established business thinking. Peter Drucker, like I need to explain who he is, long talked about the importance of effective leaders needing to be unselfish. In 1973, he shared his smart take on the most effective leaders saying “We” and not “I.”

“The leaders who work most effectively, it seems to me, never say “I.” And that’s not because they have trained themselves not to say “I.” They don’t think “I.” They think “we”; they think “team.” They understand their job to be to make the team function. They accept responsibility and don’t sidestep it, but “we” gets the credit. This is what creates trust, what enables you to get the task done.” — Peter Drucker