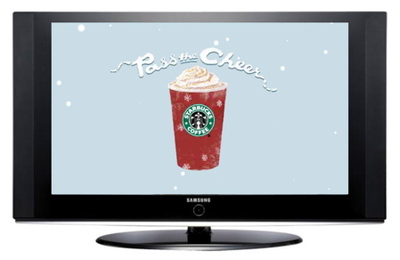 UPDATE: Click here to watch one of the Starbucks Holiday commercials.

What?
On a conference call with Wall Street analysts, Starbucks Coffee revealed fewer customers are visiting its stores and that year-over-year sales are stagnant. The company reported a 1.0% drop in customer traffic as compared to the same period last year and despite two price increases, same store sales increased only 4.0% from the year prior.

In response, Starbucks announced a three-point plan to reverse their sluggish financial numbers. First, the company will attempt to sharpen its store-level operations to better deliver the “Starbucks Experience” customers have come to expect. Second, the company will focus on introducing new beverages that are more innovative and more appealing to customers. Third, Starbucks will launch a national television advertising campaign in hopes of driving new customers into its stores as well as getting current customers to visit more often.

So What?
Since being a publicly traded company, Starbucks has never experienced a reduction in customer visits. Remarkably, they have always had more customers visiting its stores … until now. This is uncharted territory for Starbucks. And Starbucks is concerned.

Additionally, for nearly a decade, year-over-year sales at Starbucks have been very strong—anywhere from 7.0% to 13.0%. So the current trend where comp sales are stagnate in the low single-digits is quite alarming for Starbucks.

For many companies, the answer to the question of, “Sales are down and customer counts are falling, what should we do?” is to spend marketing dollars on creating a television-heavy advertising campaign. That hasn’t been the answer at Starbucks.

Starbucks has always followed the unconventional strategy of using its in-store experience as its main marketing tool. Everything about the Starbucks experience marketed the Starbucks business: the coffee in the iconic white logo cup, the personal interaction between a customer and a Starbucks barista, the in-store decor, the music playing overhead, the welcoming smell of the coffee, and the feeling customers had during their Starbucks “moment.”

As noted in the conference call, Starbucks will continue down the unconventional path of spending marketing dollars to improve the customer’s in-store experience through better store operations and more appealing beverages.

But now, the company has also decided to follow the more conventional path to arresting declining sales through launching a television advertising campaign. According to Ad Age, we can expect to see three Holiday-focused animated 30-second spots running on select cable channels and network television channels.

This dramatic change in marketing strategy goes to show us how seriously the company is taking the soft comp sales and declining transaction comps. Starbucks is willing to risk its go-to-market strategy by spending significant monies on television ads to lure customers during the Holiday season.

So why doesn’t Starbucks wait until the Spring/Summer months to go all-out with national television advertising? With sales already sluggish and customer traffic trending downward, the company doesn’t want to get too far behind their FY’08 sales goals. Keep in mind, Starbucks will generate around 25% of its 2008 sales during the six-weeks of Holiday. If the company falls behind early in hitting sales targets, 2008 could be a very rough year.

I believe this national television advertising push is a sign Starbucks is desperate to drive sales. Desperate enough to turn its back on the marketing strategy that has made Starbucks what it is today.

What Now?
We all get to sit back, watch the television commercials, and watch to see what impact this new marketing direction has on the Starbucks business and the Starbucks brand.

Want More?
Consider reading the What Must Starbucks Do? Manifesto. In April, I, along with a handful of other Starbucks customers, published a manifesto loaded with ideas on what Starbucks must do to reclaim its uniqueness, to better connect with customers, and to become the coffee company it once was. Read it again. Or, read it for the first time. >> MORE <<

If your appetite for mulling over Starbucks strategies is insatiable, you should review the series of posts Paul Williams and I did earlier this year. In this series of back-and-forth posts, we talked strategies, tactics, and shared some insider knowledge based upon our combined 19-years of marketing experience at Starbucks. Start here and work your way backward. Or, start here and work your way forward.

And of course, Jim Romenesko’s Starbucks Gossip blog is all over this.