This post continues the series where Paul Williams and I, two former Starbucks marketers, offer recommended changes based upon Howard Schultz’s email to the Starbucks leadership team. “I believe we overlooked the cause and the affect of flavor lock in our stores. We achieved fresh roasted bagged coffee, but at what cost? The loss of…

“I believe we overlooked the cause and the affect of flavor lock in our stores. We achieved fresh roasted bagged coffee, but at what cost? The loss of aroma — perhaps the most powerful non-verbal signal we had in our stores; the loss of our people scooping fresh coffee from the bins and grinding it fresh in front of the customer, and once again stripping the store of tradition and our heritage?” — Howard Schultz email

Howard’s right. The aroma of coffee no longer wafts through Starbucks stores like it used to. Operational efficiencies have eliminated numerous ways the smell of coffee used to permeate throughout every Starbucks.

Over the years, Starbucks has introduced many streamlined operational upgrades that, when combined together, have resulted in stores no longer smelling of coffee. For example:

Every one of these “inefficient” activities resulted in producing coffee aroma. Without these activities, which all required grinding of whole bean coffee to be done in every Starbucks store, it’s no wonder Starbucks stores no longer smell like coffee.

So we all understand, FlavorLock refers to the packaging Starbucks uses to store its roasted whole bean coffee in. In the simplest of terms, FlavorLock packaging allows roasted coffee beans to retain its freshness for months after the coffee has been roasted. This ability to maintain freshness allows Starbucks to ship fresh-roasted coffee beans to its stores all over the world. 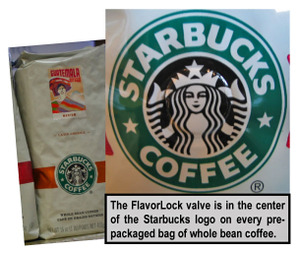 In more complex terms, FlavorLock packaging protects roasted coffee beans from being exposed to oxygen. FlavorLock is basically a one-way valve (click the above image to view the valve upclose) which allows roasted whole bean coffee to release carbon dioxide, but not to intake oxygen. No exposure to oxygen is important to roasted coffee because when coffee is exposed to oxygen, it quickly becomes stale. So, FlavorLock locks in the coffee’s freshness protecting it from the dangers of oxygen.

More than anything else, FlavorLock packaging has enabled Starbucks to become a global brand. Without FlavorLock, Starbucks wouldn’t be able to ship fresh-roasted coffee around the world and thus, Starbucks would be a considerably smaller company today.

Your honor, please exonerate FlavorLock from Howard’s malicious accusations. FlavorLock packaging is not guilty as Howard charges. Other operational efficiencies are much more responsible for the loss of coffee aroma in Starbucks stores.

In his email, Howard suggests stores should go back to storing whole bean coffee in bins behind the counter as well as scooping/bagging beans on-demand for customers. I’m not convinced those two action items really solve the problem of bringing the aroma of coffee back to Starbucks stores. There are better options.

My recommendation is for Starbucks to find ways to grind whole bean coffee more often in-store.

Instead of having pre-packaged C.O.D (coffee of the day) ground coffee from which to brew, Starbucks should strongly consider developing new drip coffee brewers. Develop an all-in-one gargantuan industrial-sized version of the home coffee brewer that grinds beans and brews coffee.

Another inefficient, albeit effective, solution is to go old-school and have each store grind their COD in-house just like they used to. Costly labor-wise but effective coffee aroma-wise.

But the easiest quick-fix to solving the coffee aroma issue is to make it mandatory for every Starbucks to package its spent coffee grounds in bags and place them in a wicker basket somewhere in the store. It’s a best practice within Starbucks that stores package its spent coffee grounds in large bags for local gardeners to use in their compost piles (usually coinciding with Earth Day). Starbucks even has a snazzy sticker to put on these bags of used coffee grounds and each store has plenty of wicker baskets to use as a storage bin for these bags. However, this is just a band-aid solution and doesn’t address the root cause.

I’m of the opinion the only way to authentically bring the aroma of coffee back to Starbucks stores is to find ways to grind whole bean coffee more often in-store. Maybe Paul can get more creative than me to solve this lack of coffee aroma issue. Paul, whattaya say?