This post continues the series where Paul Williams and I, two former Starbucks marketers, offer recommended changes based upon Howard Schultz’s email to the Starbucks leadership team. “The merchandise, more art than science, is far removed from being the merchant that I believe we can be and certainly at a minimum should support the foundation…

“The merchandise, more art than science, is far removed from being the merchant that I believe we can be and certainly at a minimum should support the foundation of our coffee heritage. Some stores don’t have coffee grinders, French presses from Bodum, or even coffee filters.” — Howard Schultz email

Over the years, Starbucks has experimented in expanding its merchandise strategy well beyond coffee. All with varying results. Translucent dustpans didn’t sell. Neither did fancy pencil sharpeners, nor did T-shirts. But music CDs have sold well. As have board games like Cranium and so have Bearista Bears.

But as Starbucks opened more locations in more neighborhoods, merchandise sales began to decline. Customers only need so many tumblers and so many mugs. Yet, Starbucks would roll-out new tumbler and mug designs every month. With sales slumping, Starbucks’ then VP of Merchandise, a former Disney exec, unleashed some Disney magic and introduced the Bearista Bear, a plush toy. 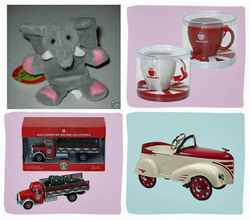 It’s not like we weren’t aware of how far the in-store merchandise focus had strayed—we were. Paul and I would shake our heads at some of the stuff we were having in-store marketing signs created for. Paul and I would also shake our heads at some of the strong sales these off-kilter products were recording. (Believe it or not, dollar-wise, Starbucks would record more sales from Finger Puppets than from Tazo Tea. Seriously. I ain’t kidding.)

Hear Music at Starbucks
Also happening at this time was the success in selling music compilations. Starbucks first dabbled in music by selling compilation CDs of jazz music. That spawned more CD compilations from a wider-range of music genres. Eventually, Starbucks went full throttle into the music business by buying a small retail shop, Hear Music, and turning it into the musical voice of the Starbucks brand.

And that leads us to today where Starbucks is more known for selling Bearista Bears and CDs than they are for selling Ethiopia Sidamo whole bean coffee. By venturing far outside of its comfortable home of coffee to increase merchandise sales, Starbucks has abdicated its coffee leadership position. How could customers take Starbucks as being serious about coffee when they are also serious about selling plush toys?

Coffee First and Second
To help reclaim its coffee leadership position, as Howard has challenged his company to do, Starbucks must refocus its merchandising efforts. I recommend Starbucks ask itself two simple questions to help guide the company on refocusing its merchandise strategy back to coffee.

The first merchandise question Starbucks must ask itself is … (#1) Does this product link directly to coffee? If yes, sell it. If no, don’t.

Bearista Bears, Finger Puppets, and Pedal Cars fail this test—they have no link to coffee. Starbucks should not sell them.

Coffee mugs and tumblers do link to coffee. Starbucks must continue selling them.

Coffee makers, whole bean grinders, and espresso machines all link to coffee, and thus should continue to be sold. But Starbucks must offer customers more options with their home brewing assortment. It’s sad, but true, that Home Depot has better assortment of coffee equipment than does Starbucks. I can also find more creative and inspired coffee makers while riffling through the on-airline Sky Mall catalog.

Starbucks has been innovative over the last few years selling ultra-high end espresso machines. These automatic machines cost hundreds and hundreds of dollars which only appeal to a very limited audience. Starbucks needs to bring that innovative spirit to the mid-range brewing equipment market. When the all-in-one grinder/brewer machines made a splash in the market a few years ago, Starbucks didn’t any to sell. They missed that curve. Starbucks must create the next curve of home brewing equipment today.

Once a product has made it past the first question and it’s coffee linkage is strong, Starbucks needs to ask a second question … (#2) Does the quality of this product match the high-quality of Starbucks coffee. If yes, sell it. If no, don’t.

Starbucks is very proud of its coffee. They truly believe it is best-in-class. Starbucks must not waste our time with products that are not as good as its coffee. Some of the coffee brewers the company has sold have not been of the best quality. For years Starbucks sold a Kontak coffee brewer that was sub-par. These days Starbucks sells coffee brewers from De’Longhi and a few under the Starbucks Barista brand name. The brewers are of adequate quality. But Starbucks doesn’t believe its whole bean coffee is adequate. Starbucks believes its coffee is the best of the bunch. So the company needs to apply its strict quality standards set forth for coffee to its merchandise.

Just Because you Can, Doesn’t Mean you Should.
What about books and music? Neither links directly to coffee. Yet, the company has been successful in selling both. Three weeks ago Starbucks began selling a memoir by a former Sierra Leonean child soldier. So far, the company has sold over 62,000 copies of this book. (Folks, that’s a lot of books!!!) Starbucks has also been very successful in selling CDs of established artists like Ray Charles and emerging artists like Antigone Rising. Rumor has it the company will step deeper into the music business by forming its own record label, Starbucks Records, and release Paul McCartney’s next CD.

Should Starbucks refrain from selling books and CDs? Tough question to answer. We can’t dismiss the fact customers view Starbucks as a lifestyle editor helping them to become hip to cultural goings-on. It’s become obvious, based upon strong sales, that customers want Starbucks to sell Books and CDs.

Maybe it’s time to play the “Just because you can, doesn’t mean you should.” card.

It takes discipline and focus for companies not to over-extend their brands in search of sales. Just because a company can extend its brand, doesn’t mean it should.

For example, in 1999 Starbucks over-extended its brand in search of sales. The prevailing wisdom of Starbucks upper management guiding this growth strategy at the time was: “Our customers have given us permission to branch out into lifestyle areas beyond coffee.” Thus, Starbucks started a full-service restaurant, a literary magazine, and a variety of other ventures far outside its comfortable home of coffee. All of these brand extensions failed.

Following these failed forays into lifestyle brand extensions, the prevailing wisdom of Starbucks upper management became: “Sometimes you have to leave home to realize how sweet home really is.” Thus, Starbucks pledged to seek sales growth opportunities by focusing supremely on areas closer to home—its core business of coffee.

That’s just my take. I’m sure Paul Williams over at the Idea Sandbox blog has some more pointed advice for how Starbucks can overcome its lack of merchandise focus.